Arm tattoos come in limitless designs. They are cool with every person irrespective fo age, gender and race. The best thing about having a tattoo on the arm is that its easy to show off or cover by wearing the appropriate cloth.

Why are Tattoos Popular on The Arm?

They are on a body part that is moderately sensitive. Getting a tattoo on the arm is not very painful. The arm is an excellent part of the body that offers sufficient room for coming up with an incredible design. It suits elaborate and subtle tattoo designs. It is also a famous part for starting up with tattoos as it is easy to cover-up with a new bigger tat.

Celebrities get tattoos to become remarkable and cool looking.

Designers and tattoo artists get tattoos to build up their portfolio and show new clients.

Why Do People Get Arm Tattoos?

Tattoos used to be for outcasts but they are now fashionable. Therefore, many people get them as a way to show their identity and their uniqueness. People are generally getting tattoos because they are the new way of demonstrating personal awesomeness.

A large majority of people are still getting tattoos to remember things and people and to communicate a particular message other than their identity. Thus, tattoos have become good ways of celebrating anniversaries, birthdays and love.

Tattoos are no longer taboos. People across the world have embraced tattoo culture and are using tattoos to assert control over their bodies. They are also using them to mark their belonging to different communities. They are non-verbal ways of making statements about a person’s lifestyle. In this regard, they are becoming as common as any other life decision.

What Do the Tattoos Represent?

Colors can represent moods and feelings of the person or the feature shown by a tattoo. Mostly, tattoos are all about unspoken aspects of human relationships that are occurring or occurred. People see tattoos on their bodies as memories. They do not have to speak about feelings or thoughts, but they can always inform others by having a tattoo to represent the feeling. Based on this understanding, there are infinite reasons and meanings of tattoos on the arm.

When someone is inked, the ink is mostly permanent, but the feeling and meaning of the tattoo will change gradually as the person changes. For example, a boyfriend tattoo can turn out to be a tattoo about the past and lessons learned. The time of getting a tattoo also plays a key role in determining the representation fo the tattoo. Often the major event that happened in a person’s just before getting inked will serve as a key reason for the decision to get a tattoo. The designs can be abstract or historical. They can be cultural or scientific. However, when being chosen, they will have to correspond to feeling and thoughts of the person getting the tattoo. Words, images and expressions of love, gentle animals, flowers and other symbols could be used for friendship and love. Similarly, other symbolic images and expressions would be relevant for other meanings. 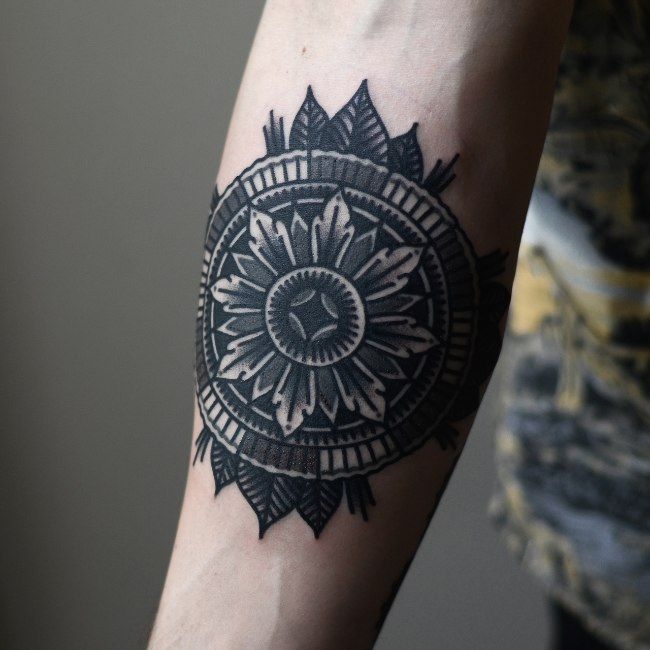 A black and white ink arm tattoo, displaying alternating concentric circles and leaf detail. The inner circle has a neat central design and then is fully surrounded by leaves. The outer circle has sectional detail, and then is encompassed by additional leaf detail at the top, bottom and both sides. 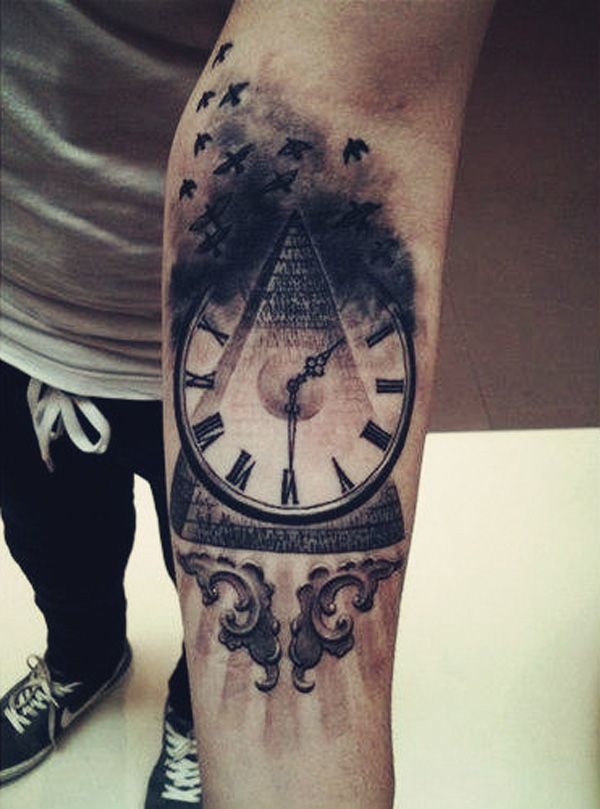 Arm tattoo in black and white with many parts. A bold arm tattoo design which focusses on a pyramid and clock merging. At the base, you have additional detail in two symmetric intricate shapes, on a faint black-striped background. At the top, the tattoo merges into birds in flight. 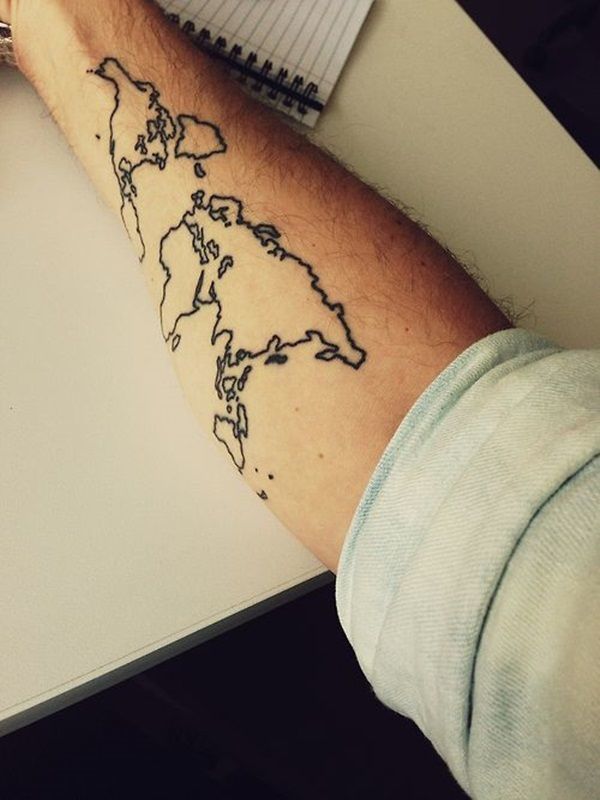 Simple line ink tattoo where the outline of the globe’s land-masses are done in black ink to illustrate the continents of the earth. The curvature of the earth is ignored so as best to show off all parts down the arm. No block colour adds to the impact of this tattoo.

Two complimentary, but very different arm tattoos celebrating the much-loved Star Wars franchise. One arm focuses on a full Stormtrooper with weapons, whilst the other focusses on Rebel Alliance hero Han Solo. The use of bold colour presents a very distinct look that captures and encapsulates the genre. 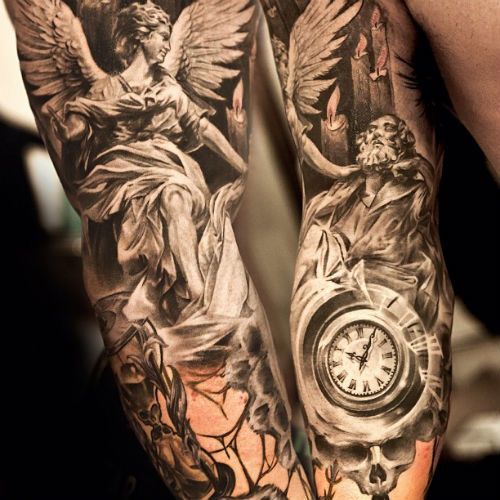 A large black and white tattoo that focusses heavily on a large angel figure, immaculately dressed reaching out to touch an old man. The symbolism below the man – namely a clock modelled on a skull gives the impression of death despite the angelic figure. 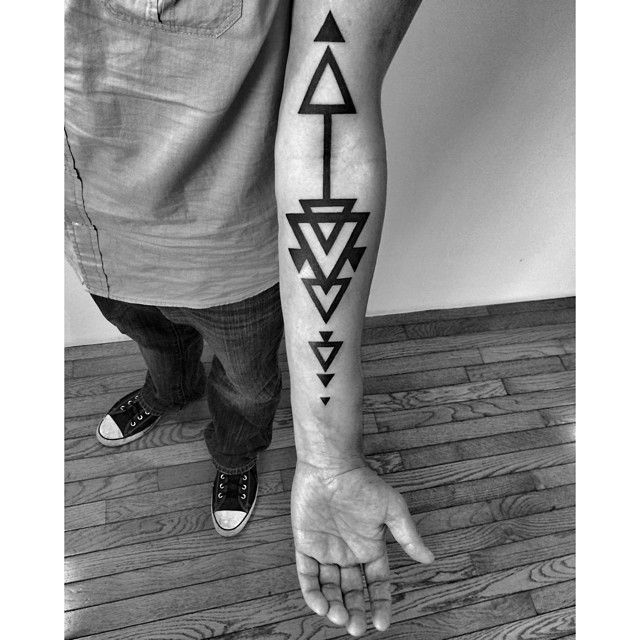 Triangles are often used in tattoos, making this an excellent arm tattoo idea. Used to either represent masculinity and femininity, to represent the church or even according to the Greeks to symbolise a doorway. This variety makes this type of clean lines design a popular choice. 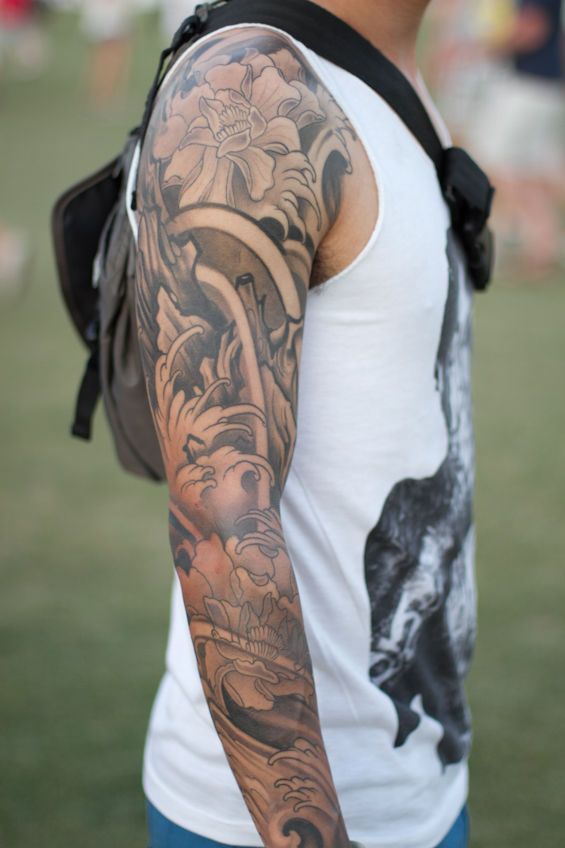 A full arm tattoo that features lots of different images seamlessly woven together. Smooth lines of block colour separate various images including wings and growing waves. It succeeds through not having a central focus point, but maintaining interesting design throughout.

A design supposed to create the illusion of machinery and robotics under the skin. Impressive amounts of detail from the interwoven cogs, and strong lines help add the feeling of clean-cut mech. The addition of a coat of arms in the middle adds a personal touch to the tattoo. 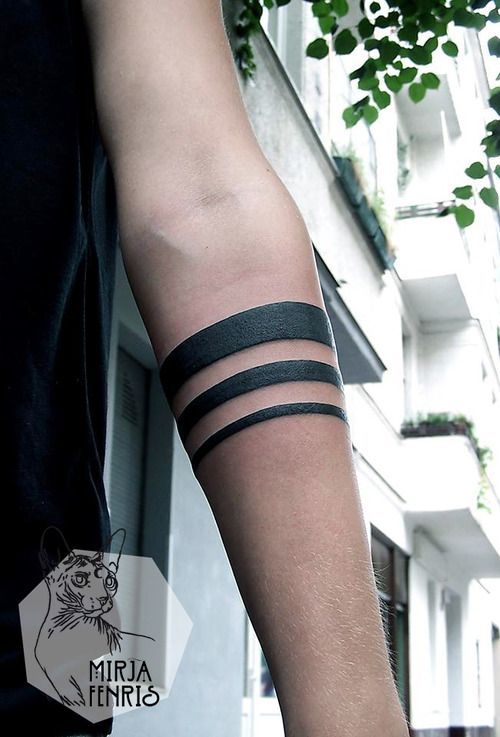 A simple but smart arm tattoo idea. Three solid band of black colour around the circumference of the arm create a clean and distinctive look that is understated yet strangely elegant. To gradually decrease the width of the band adds a touch of design flair without overstating the effect. 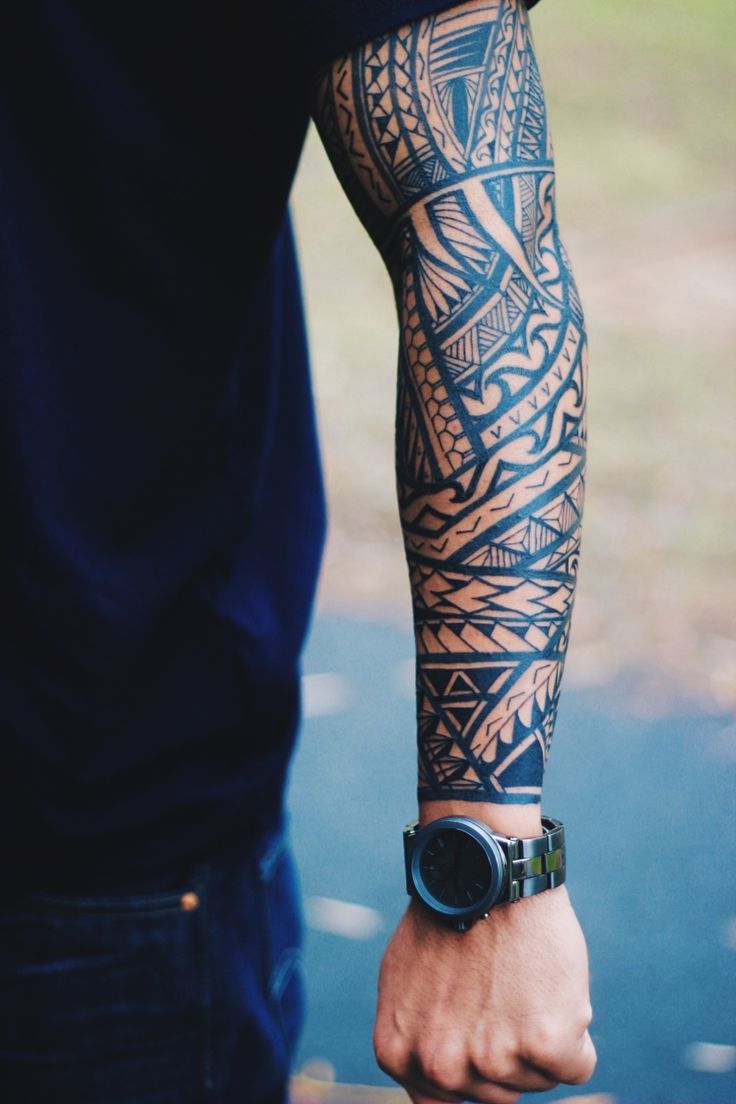 A popular arm tattoo design is a tribal look around the whole circumference of the arm. Keeping it to the lower arm allows focus on smaller, more compact woven designs to create a block tattoo that looks like it’s one big design. Smaller focussed shapes in similar styles are used to fill gaps.

Most arm tattoos stop at the wrist, but for those looking for a new tattoo idea could look at this. The tattoo flows onto the wrist, with a white fanned-out wing design on a solid black base. This theme then carries on up the arm for maximum impact.

For those looking for original tattoo ideas, look no further. A black and white tattoo of a black and white picture, is a unique and interesting idea. The tattoo manages to keep the look and feel of the original image due to its detail and use of monochrome. 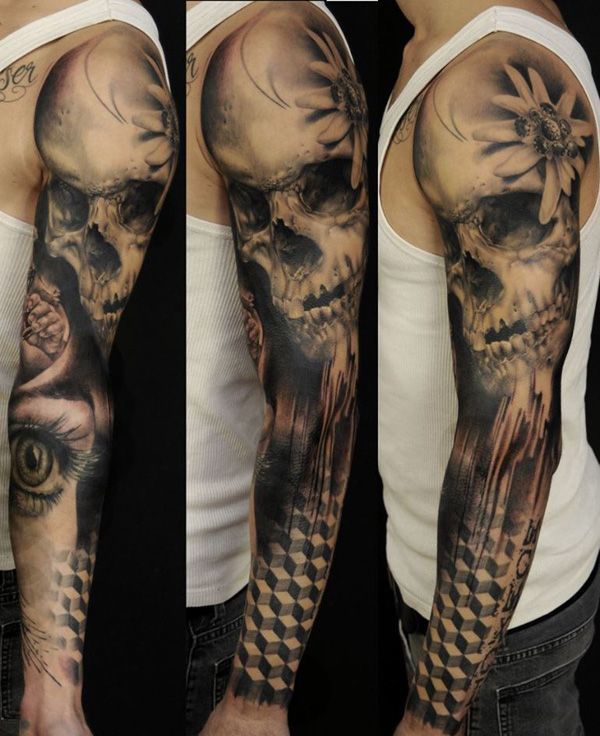 Some of the best arm tattoo ideas are those with a central focus point, which for this design is the large imposing skull. The rest of the tattoo has plenty of detail, including the flower at the top, and eye below. The geometric diamond shape at the base adds an interesting twist. 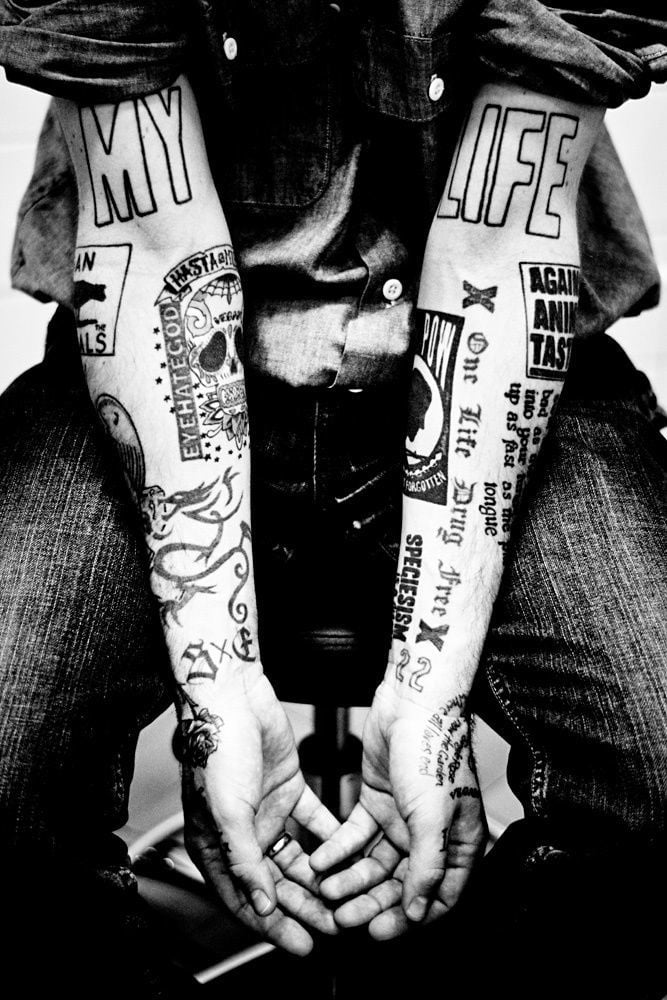 For those of you who cannot decide, sometimes multiple arm tattoos can work together to create an entire look despite being separate images. This design focusses on a variety of tattoos ranging from skulls to distinct lettering to create an imposing image across both arms. 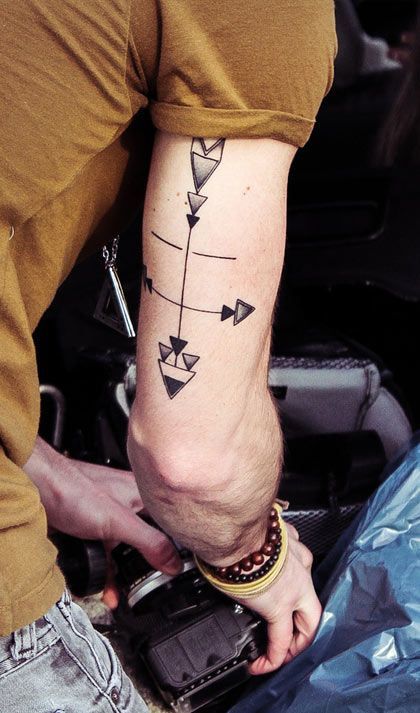 Triangles are used again, this time perpendicular and joined by two lines, crossing in the centre. As before it creates a simple and clean look, and the horizontal and vertical triangles add variety. Also the use of block colour for some triangles makes it very interesting to look at. 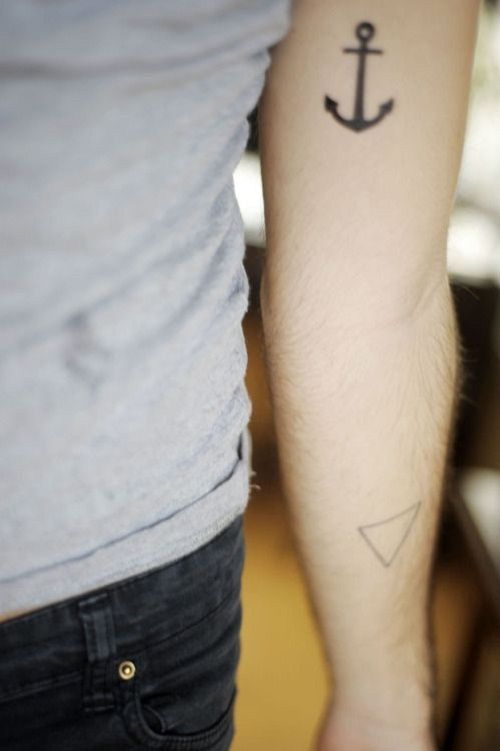 A very simple tattoo idea here. Most likely this tattoo was done to represent the symbolic representation of the feminine, which is traditionally done with an upturned triangle. This is further reinforced by it simple single design. Simple but powerful. 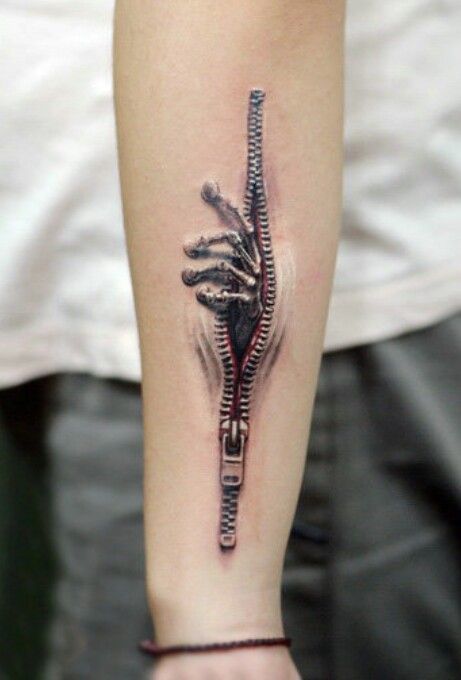 A unique arm tattoo that gives the illusion of an opening in the skin. The use of zip to imply a hand is reaching from beneath the skin is a clear and effective optical illusion. The detail on the zip itself, hand and even the “stretch-marks” of the skin are exceptional. 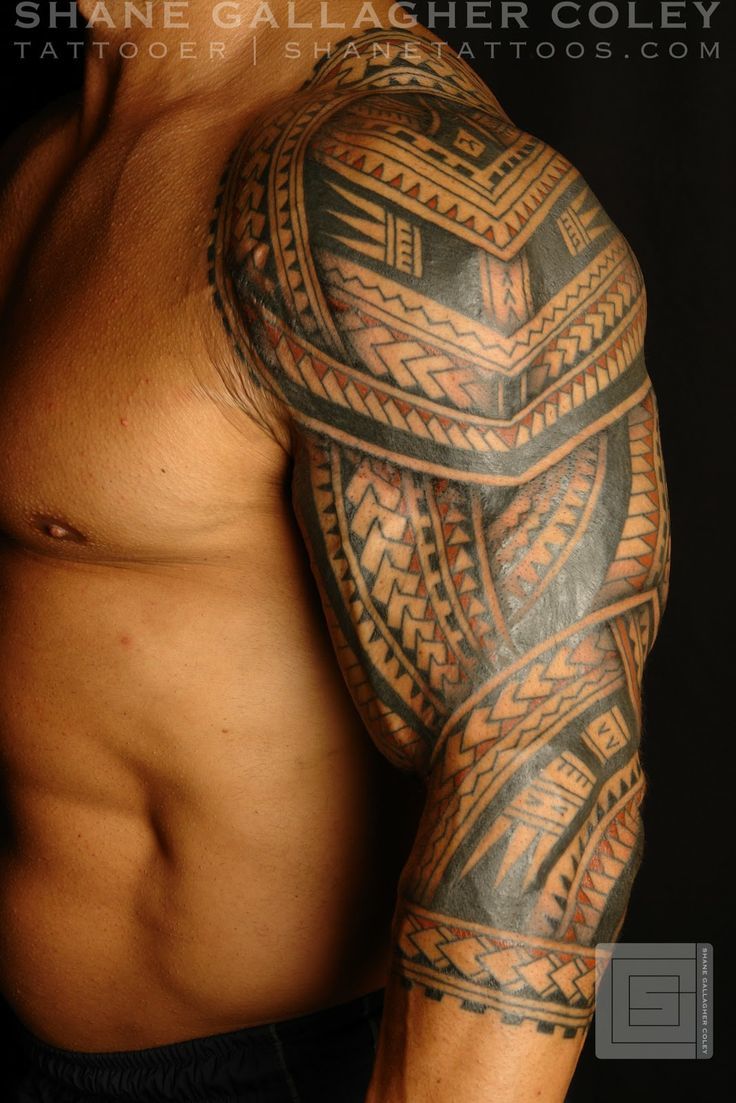 Popular amongst muscular men is the tribal tattoo in block, woven together. The sections within the tattoo tend to follow the natural muscle lines to accentuate the bicep muscle more. Sticking to clean, curved lines and simple design gives this tattoo maximum impact.

Some tattoos have impact because of the area they cover. This tattoo focusses not only on the upper and lower arm, but also on the shoulder and top of the chest. It aims for maximum impact on the chest part by carrying on the design from the shoulder. 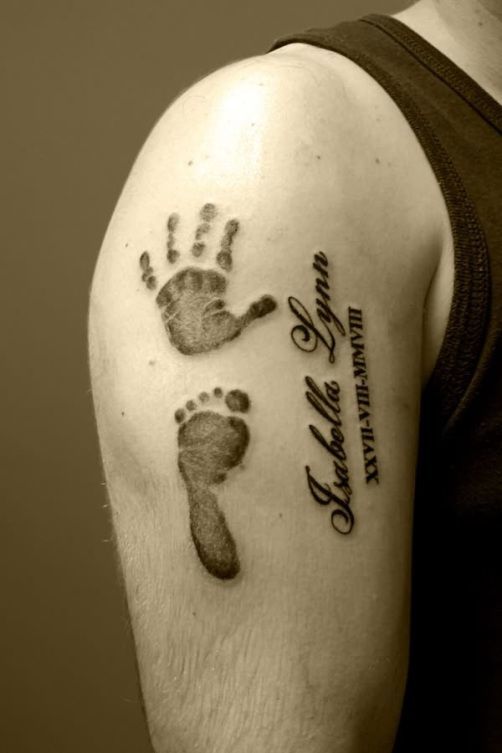 An arm tattoo idea for the sentimental amongst us. Not just simply a name and date, but an intricate hand and foot print, adds vulnerability and emotion to this tattoo, giving a permanent memory about someone we hold so dear. Immediately understood and respected.

FLORAL ARM TATTOO FOR THE LADIES

Done in shades of blue and pink, the colors make the vibrant design come to life in the most artistic manner possible. Covering the shoulder and most of the arm, it’s nothing a formal, long-sleeved shirt can’t cover up when the occasion demands. 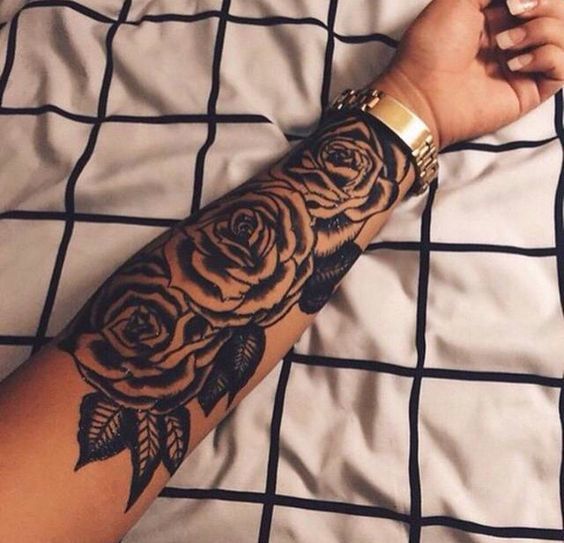 This arm tattoo covers the wrist along with the lower arm. Done in black ink, it creates a stunning contrast with the bare skin – ensuring that the design stands out. Moreover, the rose represents love and beauty.

One of the best arm tattoos out there, this band is done immediately under the elbow and depicts a wonderful night scene inked on entirely in black. It exemplifies nighttime in the best way possible with the dark trees standing tall under the quiet moonlight. 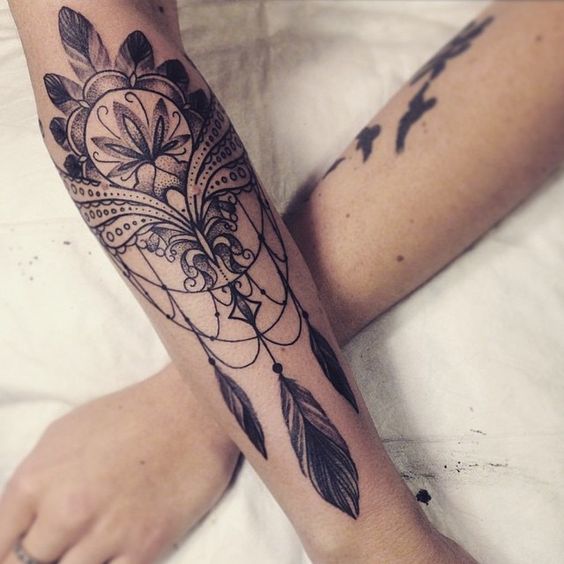 This black ink arm tattoo design is sure to make all heads turn. With the dream catcher in the midst, it symbolizes good fortune for the wearer according to Native Indian mythology. Moreover, the intricate design in each of the feathers as well as the delicate lines make it a mesmerising creation.